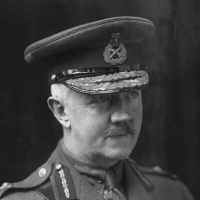 When Major-General Frederick Barton Maurice was born on 19 January 1871, in Dublin, County Dublin, Ireland, his father, John Frederick Maurice, was 29 and his mother, Annie Frances Fitzgerald, was 23. He married Margaret Helen Marsh about 1889. They were the parents of at least 1 son and 4 daughters. He immigrated to Halifax, Halifax, Nova Scotia, Canada in 1919 and lived in Woolwich, London, England, United Kingdom in 1901 and Aldeburgh, Suffolk, England, United Kingdom in 1911. He died on 19 May 1951, in Cambridge, Cambridgeshire, England, at the age of 80.

Put your face in a costume from Frederick Barton's homelands.

Tower Bridge was completed in 1894. It is built across the Thames and is a suspension bridge. It has gothic towers on either side of it and is sometimes confused with the London Bridge. It is also the oldest bridge in London.
French, English, Welsh, Scottish, and Irish: from the Old French personal name Maurice, Latin Mauritius ( see Morris ).

British General, Scholar, Author. Son of Major General John Frederick Maurice, he was a graduate of Saint Paul's School and Royal Military College, Sandhurst. In 1892, he was commissioned a 2nd Lieute …