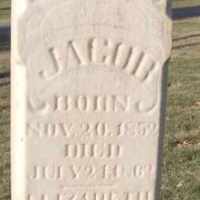 When Jacob Jones was born on 20 November 1852, in Whinburgh, Norfolk, England, United Kingdom, his father, Jeremiah Jones, was 33 and his mother, Mary Wilson, was 27. He immigrated to Utah Territory, United States in 1862 and lived in Hoe, Norfolk, England, United Kingdom in 1861. He died on 29 July 1862, in Florence, Douglas, Nebraska, United States, at the age of 9, and was buried in Florence, Douglas, Nebraska, United States.

The Crimean War was fought between Russia and an alliance of Britain, France, Sardinia and Turkey on the Crimean Peninsula. Russia had put pressure on Turkey which threatened British interests in the Middle East.
English and Welsh: patronymic from the Middle English personal name Jon(e) ( see John ). The surname is especially common in Wales and southern central England. In North America this name has absorbed various cognate and like-sounding surnames from other languages. (For forms, see Hanks and Hodges 1988 ).