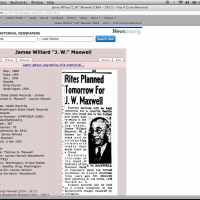 Put your face in a costume from James Willard "J.W."'s homelands.

On November 11, 1889, Washington Territory became Washington State the 42nd state to enter the Union. The state was named in honor of George Washington.
1 Scottish: habitational name from a place near Melrose in Roxburghshire. The place name is first recorded in 1144 in the form Mackeswell ‘Mack's spring or stream (Old English well(a))’.2 Irish: this surname is common in Ulster, where it has sometimes been adopted as an alternative to Miskell .3 Jewish: arbitrary adoption of the Scottish name, or Americanized form of one or more like-sounding Jewish surnames.