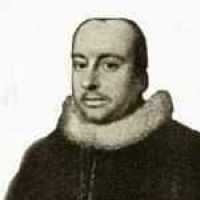 The Life Summary of Lawrence

When Reverend Lawrence Washington was born in 1602, in England, his father, Sir Lawrence Washington, was 34 and his mother, Margaret Butler, was 34. He had at least 8 sons and 6 daughters with Amphyllis Twigden. In 1643, at the age of 41, his occupation is listed as rector in Little Braxted, Essex, England. He died on 21 January 1652, in his hometown, at the age of 50, and was buried in All Saints Church, Maldon, Essex, England, United Kingdom.

Put your face in a costume from Lawrence's homelands.

English: habitational name from Washington in Durham, possibly also from Washington in Sussex. The Durham placename derives from an Old English personal name Hwassa, Hwæssa + the Old English connective -ing- + tūn ‘farmstead, estate’. In North America, this surname is by far most common among African Americans (see 2 below).African American: from the personal name Washington (or George Washington), adopted in honor of George Washington, the 1st president of the US; or adoption of the surname in 1 above, in most cases probably for the same reason.History: George Washington (1732–99), 1st president of the US (1789–97), was born at Bridges Creek, VA. His great-grandfather had emigrated from Dillicar in Westmorland in 1658. George Washington was a slaveowner, but he became troubled with the institution of slavery. Shortly before his death he decided that his slaves have to be freed after the death of his wife. — With the passage of time, the surname Washington has come to be borne by more African Americans (around 90% of all bearers) than English-Americans. A prominent example was the educator Booker T. Washington (1856–1915), born a slave in VA, who adopted his surname from his stepfather, Washington Ferguson.

Washington was admitted to Brasenose College, Oxford in 1619. He graduated in 1623 with a Bachelor of Arts,[11] and within a few days was elected a Fellow of the College. In 1626 he was awarded a Mast …