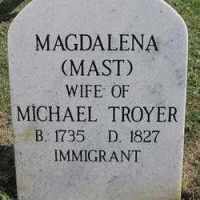 The Life of Magdalena

When Magdalena Mast was born about 1735, in Bern, Switzerland, her father, Hans Mast, was 40 and her mother, Barbara A. Risser, was 25. She married Michael David Troyer in 1752, in Stouchsburg, Berks, Pennsylvania, British Colonial America. They were the parents of at least 10 sons and 6 daughters. She immigrated to Philadelphia, Pennsylvania, British Colonial America in 1750. She died on 13 March 1827, in Holmes, Ohio, United States, at the age of 92, and was buried in Roman D Miller Farm Cemetery, Unionville, Holmes, Ohio, United States.