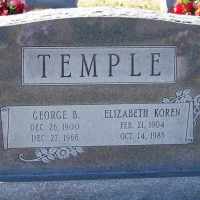 The Life of George Beauregard

When George Beauregard Temple was born on 26 December 1900, his father, George Turner Temple, was 29 and his mother, Alice Elizabeth Harvell, was 24. He had at least 5 daughters with Elizabeth Koren. He lived in Woodlawn, Salem, Virginia, United States in 1942 and Hopewell, Prince George, Virginia, United States in 1952. He died on 27 December 1966, at the age of 66.

Put your face in a costume from George Beauregard's homelands.

President William McKinley was shot at the Temple of Music, in the Pan-American Exposition, while shaking hands with the public. Leon Czolgosz shot him twice in the abdomen because he thought it was his duty to do so. McKinley died after eight days of watch and care. He was the third American president to be assassinated. After his death, Congress passed legislation to officially make the Secret Service and gave them responsibility for protecting the President at all times.
1901 · Maggie Lena Walker Opens Bank

Maggie Lena Walker was the first African American and woman to open a bank. She opened the St. Luke Penny Savings Bank on August 20, 1901. She encouraged the young people to start saving their pennies in her bank and when they hit a hundred pennies they could start a bank account with the bank.
1918 · Attempting to Stop the War

1 English and French: occupational name or habitational name for someone who was employed at or lived near one of the houses (‘temples’) maintained by the Knights Templar, a crusading order so named because they claimed to occupy in Jerusalem the site of the old temple (Middle English, Old French temple, Latin templum). The order was founded in 1118 and flourished for 200 years, but was suppressed as heretical in 1312 .2 English: name given to foundlings baptized at the Temple Church, London, so called because it was originally built on land belonging to the Templars.3 Scottish: habitational name from the parish of Temple in Edinburgh, likewise named because it was the site of the local headquarters of the Knights Templar.