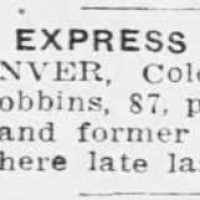 When Cyrus Robbins was born on 1 November 1837, in Brewster, Barnstable, Massachusetts, United States, his father, Alexander Robbins, was 46 and his mother, Eunice Sears, was 41. He had at least 2 sons with Almina E Barlett. He immigrated to Utah Territory, United States in 1851. He died in 1925, in Denver, Colorado, United States, at the age of 88.

In 1861, Denver City was incorporated into the territory as an official city.
English: patronymic from Robin .