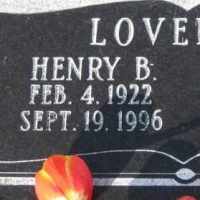 The Life of Henry Barton

Put your face in a costume from Henry Barton's homelands.

English:1. nickname from Middle English loveles ‘loveless’, ‘without love’, probably in the sense ‘fancy free’. 2. some early examples, such as Richard Lovelas (Kent 1344 ), may have as their second element Middle English las(se) ‘girl’, ‘maiden’.