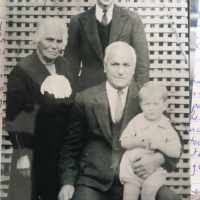 The Life of Albert William

When Albert William Andrews was born on 9 August 1879, in Mangonui, Auckland, North Island, New Zealand, his father, George John Andrews, was 42 and his mother, Jane Maria Ferguson, was 23. He married Elsie May Rout on 6 December 1911. They were the parents of at least 2 sons and 1 daughter. He died in 1946, in New Zealand, at the age of 67.

Put your face in a costume from Albert William's homelands.

Tongariro National Park was the sixth national park established in the world and the first in New Zealand. In the center of the park there lies three active volcanic mountains (Ruapehu, Ngauruhoe, and Tongariro). it is home to the famed Tongariro Alpine Crossing day hike and has been recognized as a World Heritage Site for all its natural values.
1893

The country becomes a dominion, or self-governing community, within the British empire.