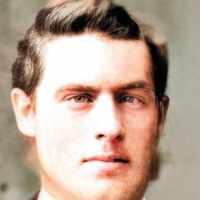 The Life Summary of Joseph Chappel

Put your face in a costume from Joseph Chappel's homelands.

English (Somerset): habitational name chiefly from Oborne in Dorset, or perhaps occasionally from Howbourne Farm in Hadlow Down, Sussex, Woburn in Bedfordshire, Woburn Park in Surrey, or Wooburn in Buckinghamshire. The placenames derive from Old English wōh ‘twisted, crooked’ + burna ‘spring, stream’, except Wooburn in Buckinghamshire, which is of uncertain etymology.English (of Norman origin): perhaps from the Middle English personal name Obern, an Anglo-Norman French form of Osbern (see Osborne ).

Joseph Oborn was born at Gillingham , England September 26, 1811. He was a laboring man and subsequently went to Bath and in course of time was married to Maria Stradling at Bristal in St Paul’s Churc …