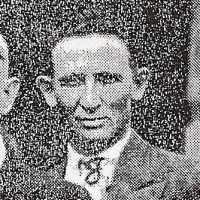 The Life of Edgar Louis

Put your face in a costume from Edgar Louis's homelands.

A landmark decision of the U.S. Supreme Court upholding the constitutionality of racial segregation laws for public facilities if the segregated facilities were equal in quality. It's widely regarded as one of the worst decisions in U.S. Supreme Court history.
1909 · History of Van Nuys, CA

"In 1909 the Suburban Homes Company, a syndicate led by H. J. Whitley, general manager of the Board of Control, along with Harry Chandler, H. G. Otis, M. H. Sherman and O. F. Brandt purchased 48,000 acres of the Farming and Milling Company for $2,500,000.[1] Henry E. Huntington extended his Pacific Electric Railway (Red Cars) through the Valley to Owensmouth (now Canoga Park). The Suburban Home Company laid out plans for roads and the towns of Van Nuys, Reseda (Marian) and Canoga Park (Owensmouth). The rural areas were annexed into the city of Los Angeles in 1915.[2][3] On April 2, 1915 H. J. Whitley purchased the Suburban Home Company so that he would have complete control for finishing the development.[4] The town was founded in 1911 and named for Isaac Newton Van Nuys, one of its developers.[5] It was annexed by Los Angeles on May 22, 1915,[6] after completion of the Los Angeles Aqueduct, providing it with the water required for further growth.[7] Van Nuys was the first new stop on the San Fernando Line of the Pacific Electric Railway red cars system, which boosted its early land sales and commercial success.[5] Van Nuys became the Valley's satellite Los Angeles municipal civic center with the 1932 Art Deco Valley Municipal Building (Van Nuys City Hall), a visual landmark and Los Angeles Historic-Cultural Monument, starting the present-day Government Center complex of government services buildings.[5] In 1991, Marvin Braude, a member of the Los Angeles City Council, redesignated a 45-block area of Van Nuys as a part of Sherman Oaks.[8] This redesignated area included the community of Magnolia Woods.[9] Some area residents had presented a petition and several original deeds that stated ""Sherman Oaks"" to Braude. They argued that the area was originally a part of Sherman Oaks until the 1960s, when ZIP Codes labeling the area as Van Nuys were established.[8] In October 2005, the Metro Orange Line opened with two stations. In 2014, a ""Great Streets"" project was introduced by Mayor Eric Garcetti with Van Nuys Bl"
1910 · The BSA is Made

German (Hessen): perhaps an altered form of Hunsrücker, a regional name for someone from the Hunsrück area, situated between the Rhine, Mosel, and Nahe. However, since the surname is now found chiefly in the Bad Wildungen–Edertal area, a different source may be involved.

Edgar was a self-made man. He graduated from Tuleta High school. He studied constantly while working in Houston and El Paso, Texas. Edgar served in WWI in the navy. He became a CPA in California.