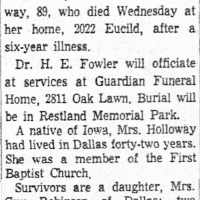 The Life of Anna Letitia

When Anna Letitia Grubb was born on 24 November 1864, in Mahaska, Iowa, United States, her father, Thomas Grubb, was 33 and her mother, Margaret Mariah Kelly, was 30. She married Elias Lincoln Holloway on 9 October 1884, in Montezuma, Poweshiek, Iowa, United States. They were the parents of at least 1 son and 1 daughter. She died on 9 June 1954, in Dallas, Dallas, Texas, United States, at the age of 89.

Put your face in a costume from Anna Letitia's homelands.