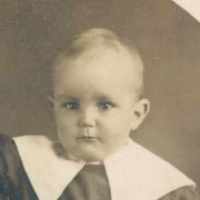 The Life of Richard Gaddy

When Richard Gaddy Lancaster was born on 7 November 1917, in Collingsworth, Texas, United States, his father, Aubrey Bassett Lancaster, was 34 and his mother, Minnie Phoebe Allen, was 31. He married Jessie Pearl Martin on 11 April 1943, in Texas, United States. They were the parents of at least 1 daughter. He died on 10 February 2002, in Auburn, Placer, California, United States, at the age of 84.

Put your face in a costume from Richard Gaddy's homelands.

To end World War I, President Wilson created a list of principles to be used as negotiations for peace among the nations. Known as The Fourteen Points, the principles were outlined in a speech on war aimed toward the idea of peace but most of the Allied forces were skeptical of this Wilsonian idealism.
1929 · The Great Depression Arrives