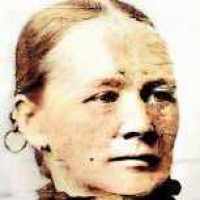 The Life Summary of Anne Gorine

When Anne Gorine Amundsdatter was born on 24 June 1811, in Skoger, Vestfold, Norway, her father, Amund Haagensen Borge, was 46 and her mother, Anne Christensdatter, was 38. She married Christopher Andersen on 29 July 1838, in Strømsø, Bragernes, Drammen, Buskerud, Norway. They were the parents of at least 2 sons and 4 daughters. She died on 25 January 1874, in Fairview, Sanpete, Utah, United States, at the age of 62, and was buried in Fairview, Sanpete, Utah, United States.

Put your face in a costume from Anne Gorine's homelands.