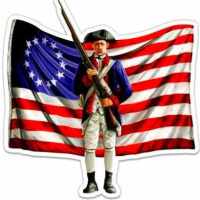 The Life Summary of Aaron Levi

When Captain Aaron Levi Deviney Jr was born on 16 April 1747, in Mount Joy, Lancaster, Pennsylvania, British Colonial America, his father, Aaron William Deveny Sr., was 37 and his mother, Margaret Huerde Stuart, was 31. He married Sarah Brackett Black about 1769, in York, Pennsylvania, United States. They were the parents of at least 3 sons and 9 daughters. He registered for military service in 1779. He died on 16 March 1842, in Duncans Creek, Rutherford, North Carolina, United States, at the age of 94, and was buried in Diviney Cemetery On Brier Creek, Duncans Creek, Rutherford, North Carolina, United States.

Put your face in a costume from Aaron Levi's homelands.

Irish: variant of Devaney . This form of the surname is now rare in Britain and Ireland.