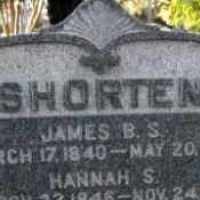 The Life Summary of James Bussy

Put your face in a costume from James Bussy's homelands.

Irish (Cork): Anglicized form of Gaelic Seartáin, a variant of Soirtéil (see Shortell ).English (Norfolk): habitational name from Shorton in Paignton (Devon), and perhaps from one or more unidentified places. The Devon placename may derive from Old English scīr ‘bright, gleaming’ + dūn ‘hill’, but this cannot be certain due to a lack of medieval forms.

James Bussy Shorten - The Incredible story of his life