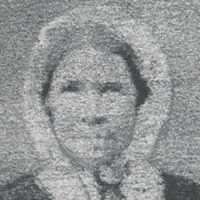 When Sarah Ann Connery was born on 16 October 1819, in Blaris, County Down, Ireland, her father, Samuel Connery, was 25 and her mother, Alice Bradshaw, was 25. She married Samuel Bryson on 16 May 1839, in Banbridge, County Down, Northern Ireland, United Kingdom. They were the parents of at least 6 sons and 5 daughters. She lived in Bridgeton, Lanarkshire, Scotland, United Kingdom in 1851. She died on 21 March 1871, in Bountiful, Davis, Utah, United States, at the age of 51, and was buried in Bountiful Memorial Park, Bountiful, Davis, Utah, United States.

Some characteristic forenames: Irish Cian, Seumas.Irish (Waterford): from Ó Conaire ‘descendant of Conaire’, a byname meaning ‘keeper of the hound’ (a derivative of cú ‘hound’). The name has been confused with Conroy .English: variant of Conroy 3.