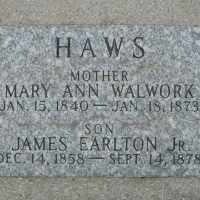 English (Lancashire): habitational name of uncertain origin. Thomas de Wallerwork was living in Lancashire c. 1324. Throughout the Middle Ages English forms in -work alternate with ones in -worth, and the surname may derive from places in County Durham or Greater London called Walworth .