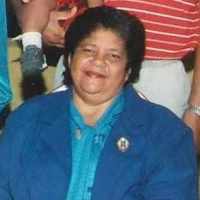 The Life of Mina Maria

When Mina Maria Raass was born on 16 March 1937, in California, United States, her father, Charles Tonga Raass, was 32 and her mother, Lute Finau Lehauli, was 28. She had at least 1 daughter with 'Okalani Lui. She died on 5 August 2003, in her hometown, at the age of 66, and was buried in Forest Lawn Memorial Park, Cypress, Orange, California, United States.

Put your face in a costume from Mina Maria's homelands.