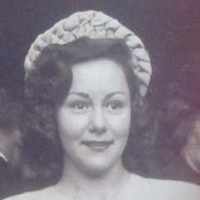 The Life of Virginia Marie

When Virginia Marie Breen was born on 23 September 1924, in Omaha, Douglas, Nebraska, United States, her father, Keeran Ambrose Breen, was 31 and her mother, Annabel Margaret Simpson, was 26. She lived in Chicago, Cook, Illinois, United States for about 10 years. She died on 11 January 2007, in Atlanta, DeKalb, Georgia, United States, at the age of 82.

Put your face in a costume from Virginia Marie's homelands.

The Goodman Theatre was founded as a tribute to the Chicago playwright Kenneth Sawyer Goodman, who died in the Great Influenza Pandemic in 1918. The theater was funded by his parents, who donated $250,000 to the Art Institute of Chicago. The first theater was designed by Howard Van Doren Shaw and its opening ceremony was performed on October 20.
1927

Irish: either a shortened form of McBreen or an Anglicized form of Gaelic Ó Braoin ‘descendant of Braon’, a byname meaning ‘moisture’, ‘drop’.