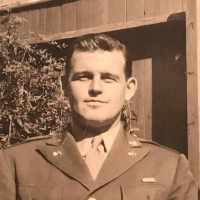 The Life of Leo Vasserot

When Leo Vasserot Merle III was born on 27 March 1911, in San Francisco, San Francisco, California, United States, his father, Leopold Vasserot Merle II, was 27 and his mother, Joan Oliver, was 25. He married Virginia Wilson on 25 September 1937, in Monterey, Monterey, California, United States. He died on 25 May 1986, in his hometown, at the age of 75.

Put your face in a costume from Leo Vasserot's homelands.

1 German and French: nickname, possibly for a good or habitual singer or whistler, from Middle High German, Old French merle ‘blackbird’ (Latin merula). See Merlo .2 German: from a pet form of a short form of a personal name formed with German mar, mer ‘famous’ as the first element.