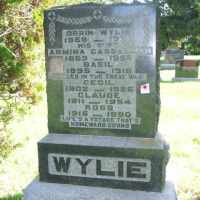 The Life of Armina

When Armina Casselman was born in 1869, in Dundas, Ontario, Canada, her father, Cephrenes Jacob Casselman, was 35 and her mother, Martha Almeda Whittaker, was 28. She married Orren John Wylie on 5 January 1892, in Elma, Williamsburgh, Dundas, Ontario, Canada. They were the parents of at least 5 sons and 6 daughters. She lived in Cambridge, Waterloo, Ontario, Canada in 1871 and Cacheville, Yolo, California, United States in 1900. She died on 9 March 1955, at the age of 86, and was buried in Brinston, Matilda, Stormont Dundas and Glengarry, Ontario, Canada.

Put your face in a costume from Armina's homelands.

Prohibits the federal government and each state from denying a citizen the right to vote based on that citizen's race, color, or previous condition of servitude. It was the last of the Reconstruction Amendments.
1883 · Mining Boom

In 1883, there was a mining boom in Northern Ontario when mineral deposits were found near Sudbury. Thomas Flanagan was the blacksmith for the Canadian Pacific Railway that noticed the deposits in the river.
1896 · Plessy vs. Ferguson

Americanized or older spelling of the German habitational name Kasselmann, denoting someone from Kassel ( see Kassel ), or Kesselman .