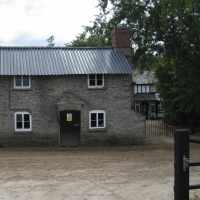 The Life Summary of Elinor

Elinor Jenkins was born on 25 December 1789, in Whitney-on-Wye, Herefordshire, England as the daughter of William Jenkins and Jane Apperley. She married John Vaughan on 16 December 1810, in Hay, Breconshire, Wales, United Kingdom. They were the parents of at least 5 sons and 4 daughters. She lived in Llanfoist, Monmouthshire, Wales, United Kingdom in 1851. She died from 28 September 1860 to 30 January 1862, in Douglas, Nevada, United States, at the age of 72, and was buried in Douglas, Nevada, United States.

Put your face in a costume from Elinor's homelands.

HISTORY OF THE HULETS By Emma Hulet Hanks, Historian (1958) We will begin our history with John Hulet, or Howlet, Mariner and blacksmith of Boston and Newton, Massachusetts. He was born about 1646 o …