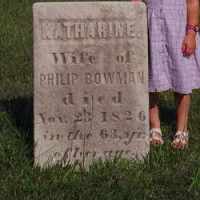 The Life of Katharine

When Katharine Fast was born on 14 August 1753, in Frederick, Frederick, Maryland, British Colonial America, her father, Nicklaus Fast, was 25 and her mother, Cadarina Margaretha Dörner, was 28. She married Lieutenant Philip Casper Bowman in 1778, in Pennsylvania, United States. They were the parents of at least 4 sons and 8 daughters. She died on 23 November 1826, in Ellsworth Township, Mahoning, Ohio, United States, at the age of 73, and was buried in Ellsworth Cemetery, Ellsworth, Mahoning, Ohio, United States.

Put your face in a costume from Katharine's homelands.

North German: nickname for a reliable steadfast person, or from a short form of any of the various personal names beginning with the element fast ‘steadfast’, ‘firm’, for example Fastert.