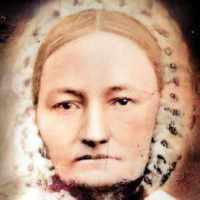 When Kirsten Andersdatter was born on 30 March 1808, in Systofte, Falsters Sønder, Maribo, Denmark, her father, Anders Jorgensen, was 26 and her mother, Bodil Mortensdatter, was 30. She married Peder Nielsen on 9 December 1831, in Nørre Ørslev, Nykøbing, Denmark. They were the parents of at least 3 sons and 4 daughters. She lived in Fakse, Fakse, Tryggevælde, Denmark in 1850 and Nørre Ørslev, Nørre Ørslev, Nykøbing, Denmark in 1855. She died on 7 November 1867, in Ephraim, Sanpete, Utah, United States, at the age of 59, and was buried in Pioneer Cemetery, Ephraim, Sanpete, Utah, United States.