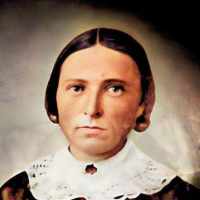 The Life Summary of Agnes Myrtle

Put your face in a costume from Agnes Myrtle's homelands.

Latinized version of the Greek name Hagnē, from the feminine form of the adjective hagnos ‘pure, holy’. This was the name of a young Roman virgin martyred in the persecutions instigated by the Roman emperor Diocletian in ad 303 . She became a very popular saint in the Middle Ages. Her name was early associated with Latin agnus ‘lamb’, leading to the consistent dropping of the initial H- and to her representation in art accompanied by a lamb. The colloquial form Annes led to some confusion with Ann(e) in earlier centuries. Frequent in the medieval period, the name was revived in the 19th century, and has been especially popular in Scotland. See also Annis .