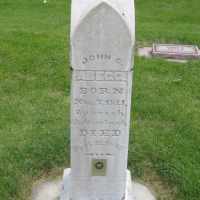 The Life of Johann Kaspar

When Johann Kaspar Abegg was born on 7 November 1811, in Wiedikon, Zürich, Zürich, Switzerland, his father, Johann Caspar Abegg, was 46 and his mother, Maria Dorothea Labhart, was 31. He married Susanna Ulmer on 5 December 1841, in Switzerland. They were the parents of at least 2 sons and 1 daughter. He died on 22 September 1879, in Payson, Utah, Utah Territory, United States, at the age of 67, and was buried in Payson City Cemetery, Payson, Utah, Utah Territory, United States.

Put your face in a costume from Johann Kaspar's homelands.