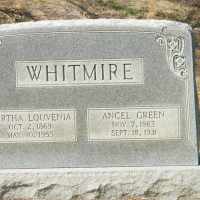 The Life of Ansel Green

Put your face in a costume from Ansel Green's homelands.

In April of 1865, the steamboat the Sultana exploded. The Civil War had been over for awhile so this was considered the worst maritime disaster in US history. Compared to the Titanic where 1,512 people were killed, 1,8000 soldiers were killed on the Sultana. Confederate soldiers that weeks earlier had been fighting with Union soldiers were now fighting to save their lives.
1881 · The Assassination of James Garfield