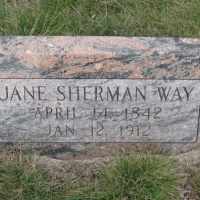 The Life of Jane A

Put your face in a costume from Jane A's homelands.

"In October 1845, the newspaper Times and Seasons published a poem written by Eliza R. Snow entitled ""My Father in Heaven."" It has become the well known hymn, ""Oh My Father."" The song is only one in the Church of Jesus Christ of Latter-day Saints hymnbook that referrs to a Heavenly Mother."
1846

HENRY WAY (from the Family Record Book of Mary Ida Rappleye Chatwin Henry Way was born at Muncie, Delaware County, Indiana, on the 8th day of Oct, 1838. He was married to Jane A. Sherman on …