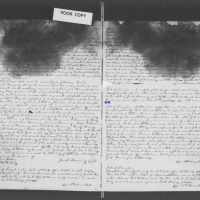 He moved with his family to Tennesse before he was ten years old. We don't know much about his life for the Hawkins County records were dumped in the street and burned by Federal Soldiers during the c …