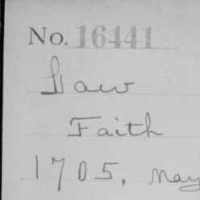 The Life Summary of Faith

When Faith Parratt was born before 6 June 1625, in Melton Ross, Lincolnshire, England, her father, Francis Parratt, was 50 and her mother, Faith Barre, was 50. She married John Smith on 24 February 1657, in Rowley, Essex, Massachusetts, United States. They were the parents of at least 2 sons and 1 daughter. She died on 30 March 1705, in Rowley, Essex, Massachusetts Bay Colony, British Colonial America, at the age of 79.

Put your face in a costume from Faith's homelands.