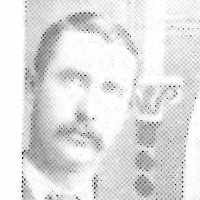 The Life of William Frederick

In 1883, there was a mining boom in Northern Ontario when mineral deposits were found near Sudbury. Thomas Flanagan was the blacksmith for the Canadian Pacific Railway that noticed the deposits in the river.
1906 · Hydro-Electric of Ontario

German:1. habitational name for someone from the city of Basel in Switzerland. 2. from an agent derivative of Middle Low German baseln ‘to behave in a confused manner’, hence a nickname for a scatterbrained person.