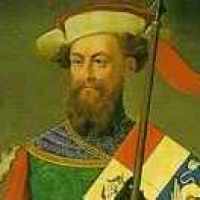 The Life Summary of Magnus I

Put your face in a costume from Magnus I's homelands.

Originally a Latin byname meaning ‘great’, this was first extracted from the name of Charlemagne (recorded in Latin chronicles as Carolus Magnus ‘Charles the Great’) and used as a given name by the Scandinavians. It was borne by seven medieval kings of Norway, including Magnus I ( 1024–47 ), known as Magnus the Good, and Magnus VI ( 1238–80 ), known as Magnus the Law Mender. There are several early Scandinavian saints called Magnus, including an earl of Orkney ( d. 1116 ), to whom Kirkwall cathedral is dedicated. The name was imported to Scotland and Ireland during the Middle Ages.