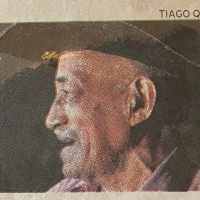 The Life of Antenor

When Antenor Orestes de Oliveira was born on 20 June 1925, in Brazil, his father, Orestes Antonio de Oliveira, was 45 and his mother, Maria Vitalina de Jesus, was 45. He married malvina dias da silva oliveira on 22 February 1951. He died in December 2014, in his hometown, at the age of 89.

Put your face in a costume from Antenor's homelands.

There are no historical documents attached to Antenor.