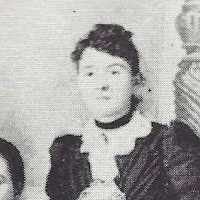 The Life of Izetta Matilda

Put your face in a costume from Izetta Matilda's homelands.

The country was in great economic distress in mid-1877, which caused many workers of the Railroad to come together and began the first national strike in the United States. Crowds gathered in Chicago in extreme number to be a part of the strike which was later named the Great Railroad Strike. Shortly after the strike began, the battle was fought between the authorities and many of the strikers. The conflict escalated to violence and quickly each side turned bloody.
1883 · The Newhall House Hotel Fire

A fire erupted on January 10, 1883, at the Newhall Hotel in Milwaukee. The fire began at 4:00 am in an elevator shaft and raced up through the building. The fire spread so quickly that many could not escape. General and Mrs. Tom Thumb, stars of P.T. Barnum's circus, were guests in the hotel at the time of the fire. A firefighter reached them by ladder and they were able to escape safely. The exact number of deaths remains unknown as the hotel register was destroyed in the fire, however, the death toll is estimated between 75-90.
1904 · The World's Fair of 1904