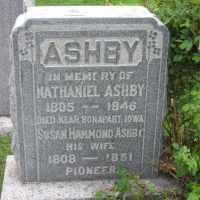 Joseph Story built his house in 1811. That was the year he was made an Associate Justice of the Supreme Court. He was the youngest ever justice.

Nathaniel Ashby was born 15 April 1805. Nathaniel and Susan Hammond were married 30 November 1826 in Salem, Massachusetts. Nathaniel’s father was a man by the name of Benjamin and his Mother was …