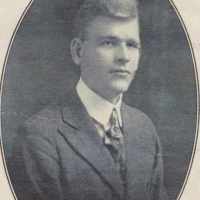 The Life of Gusse Ernest

Put your face in a costume from Gusse Ernest's homelands.

After the explosion of the USS Maine in the Havana Harbor in Cuba, the United States engaged the Spanish in war. The war was fought on two fronts, one in Cuba, which helped gain their independence, and in the Philippines, which helped the US gain another territory for a time.
1899 · Mount Rainier National Park is Established

Mount Rainier was established as a state park on March 2, 1899 with legislation was signed by President McKinley. Mount Rainier is a volcanic peak surrounded by forests.
1927

Hebrew: In Hebrew, the scriptural name Adhám signifies "man," literally earthy or red earth; one authority says the name in Ethiopic means to be fair or beautiful. From this name comes the nurse-name Addy, or little Adam. The Gaelic form is Adambh. Adamina is a female name formed from Adam.