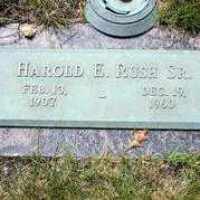 The Life of Harold E

Put your face in a costume from Harold E's homelands.

Known as the National Bureau of Criminal Identification, The Bureau of Investigation helped agencies across the country identify different criminals. President Roosevelt instructed that there be an autonomous investigative service that would report only to the Attorney General.
1910 · Upper Twin Falls Bridge

The Upper Twin Falls Bridge which connected Breitung Township, Michigan, to Florence County, Wisconsin. The through-truss bridge spanned the Menominee River and was completed in 1910. The bridge was closed to through traffic in 1971 and was listed on the National Register of Historic Places.
1923 · The President Dies of a Heart Attack

1 English: topographic name for someone who lived among rushes, from Middle English rush (a collective singular, Old English rysc), or perhaps an occupational name for someone who wove mats, baskets, and other articles out of rushes.2 Irish: reduced Anglicized form of Gaelic Ó Ruis ‘descendant of Ros’, a personal name perhaps derived from ros ‘wood’. In Connacht it has also been used as a translation of Ó Luachra ( see Loughrey ).3 Irish: Anglicized form (translation) of Gaelic Ó Fuada, ‘descendant of Fuada’ a personal name meaning ‘hasty’, ‘rushing’ ( see Foody ).