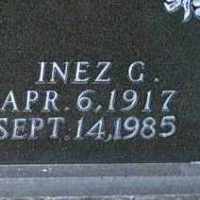 The Life of Inez

When Inez Gamble was born on 6 April 1917, her father, John Sumter Gamble, was 30 and her mother, Cora Elizabeth Gullett, was 24. She married Harold Covington Marshall on 6 October 1934. She lived in Beat 3, Prentiss, Mississippi, United States in 1930. She died on 14 September 1985, at the age of 68, and was buried in Prentiss, Mississippi, United States.

Put your face in a costume from Inez's homelands.

To end World War I, President Wilson created a list of principles to be used as negotiations for peace among the nations. Known as The Fourteen Points, the principles were outlined in a speech on war aimed toward the idea of peace but most of the Allied forces were skeptical of this Wilsonian idealism.
1925 · B.B. King is Born

B.B. King was born on September 16, 1925, in Itta Bean, Mississippi. He was a famous American blues singer, electric guitarist, and record producer. In 1987, he inducted into the Rock and Roll Hall of Fame.
1935 · The FBI is Established