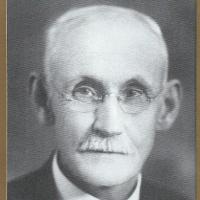 When Hubert Lester Clark Hall was born on 22 February 1858, in Winthrop, Suffolk, Massachusetts, United States, his father, Isaac Clark Hall, was 37 and his mother, Susannah Ryder, was 35. He married Mary Elizabeth Neff on 19 October 1887, in Logan Utah Temple, Logan, Cache, Utah, United States. They were the parents of at least 3 daughters. He died on 26 May 1930, in Santa Monica, Los Angeles, California, United States, at the age of 72, and was buried in Wasatch Lawn Memorial Park, Millcreek, Salt Lake, Utah, United States.

Put your face in a costume from Hubert Lester Clark's homelands.