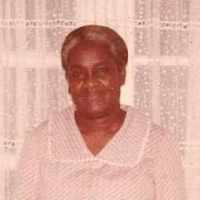 The Life of Violet Ursula

When Violet Ursula Lewis was born on 14 February 1924, in Bank Hall, Saint Michael, Barbados, her father, Fitz Herbert Lewis, was 33 and her mother, Bertina Eunice Healis, was 27. She married Alfred Pearl Clarke on 19 June 1947, in Trinidad and Tobago. They were the parents of at least 1 son. She died on 15 March 2012, in Falls Church Magisterial District, Fairfax, Virginia, United States, at the age of 88.

Put your face in a costume from Violet Ursula's homelands.

Charles Lindbergh makes the first solo nonstop transatlantic flight in his plane The Spirit of St. Louis.
1941 · Pentagon is Built in Arlington

The Pentagon was developed as the Department of Defense had outgrown the other buildings were it was previous located.The groundbreaking for the Pentagon was on September 11, 1941. When the Pentagon was being built, it was determined that it could be no taller than four stories high. Colonel Leslie R. Groves was the supervisor of the project, he would later become known for helping on the Manhattan Project.
1947 · The Presidential Succession Act

There are no historical documents attached to Violet Ursula.