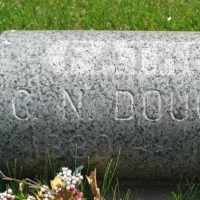 The Life of Collie Newton

Put your face in a costume from Collie Newton's homelands.

The capitol building in Des Moines originally had a budget of $1,500,000 but complications arose because of the need of a redesign. The building was dedicated on January 17, 1884, but it wasn’t completed until 1886. On January 4, 1904, a fire started and swept through the areas that housed the Supreme Court and Iowa House of Representatives. A major restoration was performed and documented, with the addition of electrical lighting, elevators, and a telephone system. By the early 1980s, the sandstone exterior of the Capitol had started deteriorating and prompted the installation of canopies to protect pedestrians from falling rubble. The entire reconstruction process took around 18 years to complete.
1902 · So Much Farm Land

Scottish: habitational name from any of the various places called Douglas from their situation on a river named with Gaelic dubh ‘dark’, ‘black’ + glas ‘stream’ (a derivative of glas ‘blue’). There are several localities in Scotland and Ireland so named, but the one from which the surname is derived in most if not all cases is 20 miles south of Glasgow, the original stronghold of the influential Douglas family and their retainers.