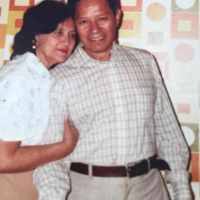 The Life of Ida Esperanza

Ida Esperanza Paredes Vasquez was born on 13 June 1923 as the daughter of Florencio Octavio Paredes Franco and Mercedes Antonieta Vasquez. She died on 27 July 2014, in United States, at the age of 91.

Put your face in a costume from Ida Esperanza's homelands.

Spanish, Galician and Portuguese: topographic name for someone who lived in a lean-to built against the wall of a larger building, from Spanish pared, Portuguese and Galician parede ‘(house) wall’. Servants often lived in buildings of this sort outside manor houses, and masons constructed huts of this kind on the site of their labors, making temporary use of the walls of the new building. There are also numerous places named with this word, and the surname may also be a habitational name from any of these.

There are no historical documents attached to Ida Esperanza.