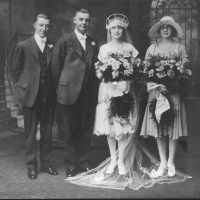 The Life of Mary Agnes

Put your face in a costume from Mary Agnes's homelands.

1 Irish: reduced Anglicized form of Gaelic Ó hEodhusa ‘descendant of Eodhus’; this was the name of a bardic family associated with the Maguires of Fermanagh, also Anglicized as Oswell , Oswald .2 English (of Norman origin): habitational name from Houssaye in Seine-Maritime, so called from a collective noun from Old French hous ‘holly’.3 English: nickname for a woman who was mistress of her own household, from Middle English husewif (a compound of Old English hūs ‘house’ + wīf ‘woman’). It was not until the 17th century that this word acquired pejorative connotations.