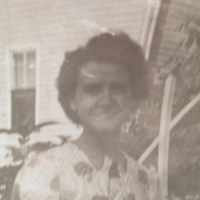 When Josephine Pucheu was born in 1894, in Sydney Mines, Cape Breton, Nova Scotia, Canada, her father, Pierre (Peter) Pucheu, was 35 and her mother, Marie Christine Bonnain (Bonnin), was 35. She married Claude Archibald Kelly in 1913, in Cape Breton, Nova Scotia, Canada. They were the parents of at least 4 sons and 2 daughters. She lived in Boston, Suffolk, Massachusetts, United States for about 10 years. She died in 1949, at the age of 55.

After the explosion of the USS Maine in the Havana Harbor in Cuba, the United States engaged the Spanish in war. The war was fought on two fronts, one in Cuba, which helped gain their independence, and in the Philippines, which helped the US gain another territory for a time.
1909 · The NAACP is formed