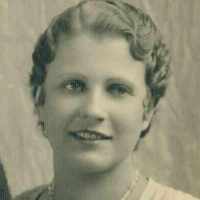 The Life of Serena Evelyn Martha

When Serena Evelyn Martha Feldhahn was born on 14 December 1914, in Elkhorn Township, Stanton, Nebraska, United States, her father, Albert Frederick William Feldhahn, was 25 and her mother, Martha Bertha Amelia Reichow, was 25. She married Leonard Siecke on 1 August 1933, in Pierce, Nebraska, United States. They were the parents of at least 1 son. She died on 10 October 1996, in Sioux City, Woodbury, Iowa, United States, at the age of 81.

Put your face in a costume from Serena Evelyn Martha's homelands.

Original construction of the Camp Dodge began in 1907 and was originally planned to provide a place for the National Guard units to train. In 1917, it was handed over to national authorities and expanded to become the regional training center for World War I forces. The Camp was named after Brigadier General Grenville M. Dodge, who organized Iowa's first National Guard unit. When the war ended, the camp was downsized and turned back over to the state until the start of World War II. Today, Camp Dodge has served only as a Guard and Reserve installation.
1937 · The Neutrality Act