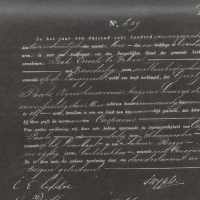 The Life Summary of Casparus

When Casparus le Febre was born on 21 May 1871, in Leiden, South Holland, Netherlands, his father, Izak Enoch le Febre, was 36 and his mother, Grietje Paats, was 37. He married Catharina Pardon on 6 April 1898, in Leiden, South Holland, Netherlands. They were the parents of at least 8 sons and 3 daughters. He died on 4 October 1945, in his hometown, at the age of 74.

Put your face in a costume from Casparus's homelands.

The Dutch began colonization efforts in Aceh province (Indonesia), which led to a decades-long war.

Holland America Line originally headquartered in Rotterdam, South Holland, Netherlands was founded in 1873. It has since moved to Seattle, Washington. It is now part of the Carnival Cruise Line.