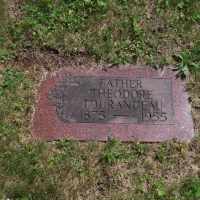 Put your face in a costume from Théodule's homelands.

The First official World's Fair, was held to celebrate the 100th anniversary of the signing of the Declaration of Independence in Philadelphia. 37 Countries provided venues for all to see.
1879 · New State Capitol Building Dedicated

French: from a derivative of Tourange, an old form of Touraine, hence a regional name denoting someone from the Touraine region, or from its main city, Tours. In Canadian usage, this has principally been a secondary surname, still with its original significance.