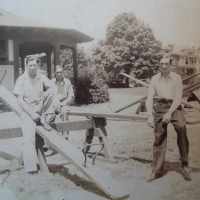 The Life of David L.

When David L. Marion was born on 30 April 1921, his father, John Thomas Marion, was 30 and his mother, Abigail Maggard, was 25. He married Rosie Caudill on 1 January 1943, in Pittsburg, Laurel, Kentucky, United States. They were the parents of at least 1 son. He died on 8 February 2011, at the age of 89, and was buried in Mount Washington, Bullitt, Kentucky, United States.

Put your face in a costume from David L.'s homelands.

In 1926, in central Kentucky, Mammoth Cave was discovered. It dates back to Mississippian times and consists of over four hundred miles of passageway. On July 1, 1941, the cave was made a National Park.
1945 · Peace in a Post War World

French and English: from a pet form of Marie 1.