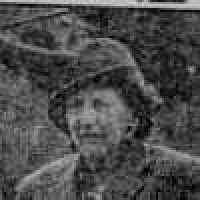 The Life of Bernice Eugenie

Put your face in a costume from Bernice Eugenie's homelands.

August: Australia becomes involved in World War One as Britain is preparing to declare war on Germany.
1918

English: habitational name from any of the various places, in Derbyshire, Northamptonshire, and Devon, named with Old English hǣð ‘heathland’, ‘heather’ + dūn ‘hill’, or from Haddon in Cambridgeshire, which is probably named from the Old English personal name Headda + dūn.